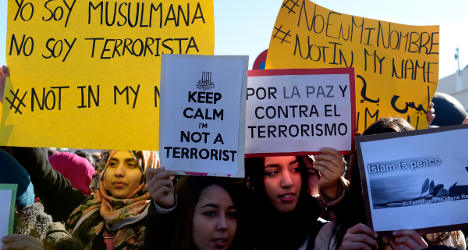 Muslim women in Madrid on Sunday during a show of solidarity following three days of bloodshed triggered by an attack on French satirical weekly Charlie Hebdo. Photo: AFP

Hundreds of people in Madrid gathered at rallies at the central Puerta del Sol and at the city's Atocha train station to take a stand against terrorism.

The Atocha demonstration was organized by Spain's Arab Culture Foundation (Funca), with many Muslim and Jewish participants expressing their outrage over the attack which shocked France.

Veiled women with young children joined groups of young men at the rally, holding up signs that read "Not in our name" and "I am Muslim and I am not a terrorist".

The rally was held near a monument to the victims of the March 11, 2004 train bombings, when Islamist militants killed 191 people and injured nearly 2,000 in a series of coordinated backpack bomb attacks on trains travelling to the station. "This is to say that we are against all types of terrorism that have been carried out in here in Spain or any other country, that you can't commit terrorism in the name of noble or less noble causes," said Said Ida Hassan, the head of the Arab Cultural Foundation, one of the organizers of the demonstration.

"If you are against Charlie Hebdo there are legal means. We want to encourage dialogue, the culture of respect."

The Spain protests took place on a day when tens of thousands of people joined rallies in cities across Europe on Sunday, singing the Marseillaise and holding up pens in solidarity with France after terror attacks left 17 people dead.

Some 20,000 people marched through the Belgian capital Brussels, holding banners saying "United against hate" and "Freedom of speech".

In Berlin, 9,000 joined the march while elsewhere in Europe, about 3,000 people turned out in driving snow and sub-zero conditions in Stockholm, many holding pens in the air.

Others were shielding candles from the wind in a silent vigil for the victims, according to Journalists Without Borders which organised the Swedish rally.