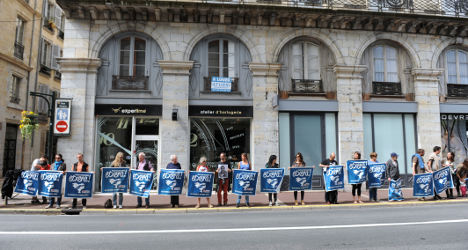 People hold banners reading "Exiles and prisoners back home !"during a demonstration in May 2014 in Bayonne, France. Photo: Gaizka Iroz/AFP

"The trial was suspended, because of the detention of three comrades," one of Batasuna's defence lawyers, Jone Goirizelaia, told news agency AFP following a wave of
arrests on Monday morning.

Police arrested 16 people connected to the terror group Eta in the Basque Country, Pamplona and Madrid, with the detainees being investigated over possible crimes including tax fraud and money laundering, Spanish media reported.

Among those detained were 12 Eta lawyers and four ex-treasurers of the Eta prisoner support group Herrira, those reports said.

Detainees are accused of fraud against Spanish tax authorities, not paying value-added tax and money laundering, newspapers said of the operation being carried out in secret by Spain's National Court.

Spain's El Mundo newspaper claimed the detainees were also accused of exercising control over jailed Eta prisoners in 2012 and 2013 and for crimes associated with belonging to a terrorist organization, although this has not been confirmed.

Among those arrested is Amaia Izco, also the national spokesperson for the leftist basque party, Sortu, El Mundo said.

The interior ministry said the operation was continuing and it would provide further details later on Monday.

The operation came just hours before 35 people were due to go on trial in Madrid accused of membership of extreme left groups that campaign for Basque separatism.

Two French nationals, Aurore Martin and Haizpea Abrisqueta, are among the accused along with veteran Basque independence leaders such as Juan Jose Petrikorena.

Eta is blamed for killing 829 people in a four-decade campaign of bombings and shootings for an independent Basque homeland in northern Spain and southwest France.

The group — which is considered a terrorist organisation by the Spanish government, the European Union and the United States — declared an end to its armed campaign in 2011.