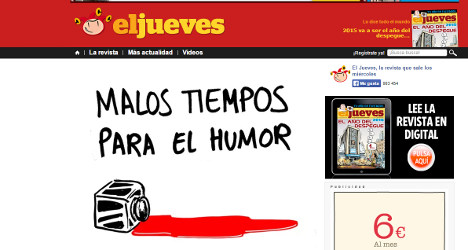 Gonzalo Boyé, editor of the hugely popular satirical magazine Mongolia, founded in 2012, told the Spanish Huffington Post the attack was an "extremely grave and barbaric act".

"We respect all religions", he continued, "but they cannot be above the right to life."

"After what happened yesterday at Charlie Hebdo we should not lose focus: the enemy is not muslims but terrorists who hide behind religion".

The magazine has also tweeted the original Muhammed cartoons that appeared in Charlie Hebdo and is awaiting confirmation from France that they can publish them in the magazine.

Mongolia’s current homepage features a screenshot taken from Charlie Hebdo as well as a statement on the attack.

"At Mongolia we consider freedom of expression a superior value and no religion can restrict or limit that."

The magazine also offered its support to all the family members of those who died and were injured at Charlie Hebdo and added that if radicals thought that they could kill 12 people to silence those working in satire, they were wrong.

"These deaths will make us redouble our efforts and work," the magazine said in its statement.

Meanwhile, the satirical magazine El Jueves, founded in 1977, which decided not to publish the controversial Muhammed cartoons at the time when Charlie Hebdo did so, has also come out in support of the French magazine.

El Jueves features a cartoon on its website that says “a bad time for humour” above a drawing of an inkwell, turned on its side, blood oozing out of it.

José Luis Martín Zabala, founder of El Jueves, told the Spanish Huffington Post that "we are completely devastated, we have goosebumps. It is something so brutally extraordinary. To think that in the 21st century these savages can come from the past and kill in the name of god or something like that… You can´t even imagine what these people are thinking."

When Charlie Hebdo originally published the controversial Muhammed cartoons in 2006, El Jueves decided not to follow suit, instead opting for a front cover making fun of itself, saying it was "too chicken" to do so.

For ongoing coverage head over to The Local France.