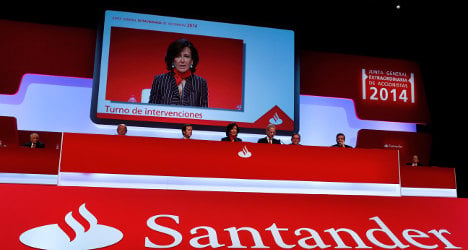 "This operation will be carried out through an accelerated placement," said Santander, the eurozone's biggest bank by market value, after its board members held an extraordinary meeting.

The lender did not say why it was carrying out the capital hike.

But Bloomberg news agency, which first reported that Santander was considering such a move, said new chairman Ana Botin is looking to strengthen the bank's balance sheet as investors have expressed concerns that capital at the lender is weaker than some competitors.

Botin, who took over from her father Emilio Botin in September when he passed away after nearly three decades at the helm of the lender, has said the bank faces a growing challenge from tougher competition and stricter regulations.

The capital increase will the the biggest undertaken by Santander since 2008 when it raised 7.2 billion euros to improve its capital ratio at the height of the financial crisis.

Santander was not spared from the collapse and had to write off billions in bad home loans, with some 19 billion euros wiped out from its books in 2012 alone.

Two months after Botin took the helm of Santander she removed Javier Marin, who had been appointed chief executive two years earlier by her father.

She promoted Jose Antonio Alvarez, who had been Santander's chief financial officer for a decade, to the post.

Shareholders will be offered cash for three of the four payments expected this year, while one will be in shares.

The overall dividend payout is likely to be 20 cents a share this year, compared with 60 cents in the previous year, the bank said.

Shares in Santander rose by over three percent on Thursday before trading was suspended by the stock market regulator pending the announcement from the bank.

The lender said it would provide further details on the capital increase later on Thursday.