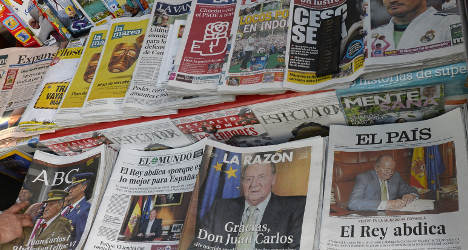 Spanish newspapers announcing the abdication of Spain's King Juan Carlos in June 2014. File photo: Gerard Julien/AFP
The offices of Spanish media group La Prisa, home of newspaper El País, were evacuated after a suspicious package was discovered.
Journalists from the media group took to Twitter posting photographs and updates of the situation.

La Prisa is home to the most widely read newspaper in Spain, El País, as well as the newspaper Cinco Dias and the Spanish Huffington Post.

Staff at the group were given the all-clear to return to their desks at around 4pm, Spanish media reported.

Also on Wednesday, the offices of Spanish newspaper Libertad Digital was cordoned off after a suspicious package was received, although it is not known if the two incidents were connected.

Both incidents were false alarms, a police spokesperson told The Local.