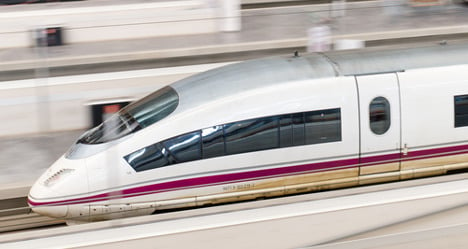 Spain's public works ministry is planning to add around 1,000 kilometres (621 miles) to the country's Ave, or high-speed rail network in 2015.

The plans will see the cities of Zamora, Leon, Palencia and Burgos connected to the system in the north. In the east, Valencia will be linked to Castellón while Alicante and Murcia will also have Ave access.

In the south, meanwhile, the route from Seville to Cadiz will be completed while the Ave will finally arrive in the tourist hotspot of Granada.

Salamanca will also be added to the network, although trains won't travel at their maximum speeds of 300kmh, while the Galician cities of Pontevedra and Vigo are set for Ave stations in 2015.

Also joining the club is a high-speed line linking the cities of Plasencia and Badajoz in Spain's west, which will run via the cities of Cáceres and Mérida.

Spain's high-speed rail network, inaugurated in 1992 with a link between Madrid and Seville, is generally considered one of Spain's great achievements, cutting the time taken to travel between many major points in the country.

More people now travel by train than plane within Spain and spending on the network in 2015 is set to be double the amount spend on the nation's highways.

However, not everyone is a fan: Germany has noted that traffic between many points on the Ave network is insignificant, a criticism that Spain has countered by saying the network spurs economic growth.