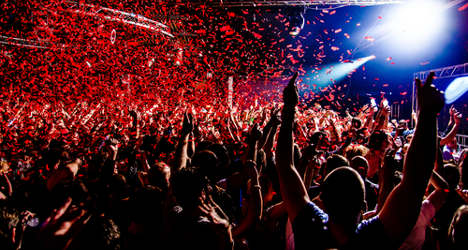 File photo of a rave: Shutterstock

The rave breached the regional Valencian government's laws governing shows and performances, for not having any authorization or complying with the necessary security measures.

The music which had been blasting out for five days straight was finally turned off at midday on Monday January 5th so the venue could be cleaned and the stages and equipment taken away.

Throughout the five-day rave, police operated a checkpoint with 64 officers each day identifying the people who were attending as well as carrying out traffic, drugs and alcohol checks.

Police confirmed that up until Monday morning they had inspected 405 vehicles, carry out identity checks on 1,341 people and identified 42 different offences, including 18 drug-related offences and six for possession of a firearm.

Serafín Castellano,a representative of Valencia’s provincial authorities, told Spanish newspaper 20minutos that "after being contacted for the umpteenth time" the rave’s organizer finally began shutting it down.

This was despite the fact that around 200 people remained at the rave on Monday, even as equipment was being taken down and dismantled.

Castellano also noted that the majority of attendees of the party were foreigners "from six or seven different countries" but there were also some Spaniards in attendance.