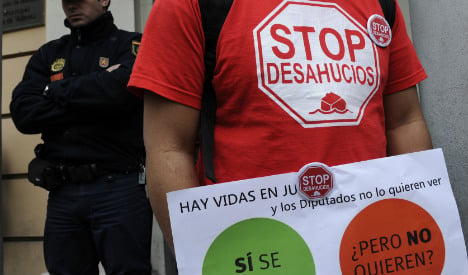 They take turns to speak, standing shoulder to shoulder in the face of an economic crisis that began in 2008 and continues to drag on for them.

The regional government of Madrid has sold her 46-square-metre apartment to a private company that drastically increased the monthly rent.

Hidalgo, an unemployed mother of two children aged four and eight, only has a monthly income of €323. If she fails to pay her rent, she will be evicted on February 18th.

The Vallecas meeting took place just before Christmas and Hidalgo said she could only give her children gifts that were donated by churches.

She said she may also be able to get some help from her mother or the father of her children, although he too is jobless.

The meeting was called by anti-eviction group "Stop Expulsions", which holds such self-help gatherings once a week in Vallecas, a town badly hit by Spain's economic crisis that erupted when the property bubble burst six years ago.

The group alerted the media to the case of 85-year-old Carmen Martinez Ayuso, who in November was evicted from the modest Vallecas apartment where she had lived for five decades.

The widow had co-signed a loan of 40,000 euros for her only son, using the flat as collateral. He lost his job four years ago and the family was unable to make payments.

The case sparked indignation across Spain and it served as a reminder that despite statistics showing the Spanish economy is on the mend, people are still suffering and facing a bleak new year.

Spain technically exited recession in mid-2013 after five years of economic turbulence sparked by the collapse of the labour-intensive property sector, but the unemployment rate remains extremely high at 24 percent.

"When you watch television, you end up getting angry," said Antonio Ortiz, who took part in the meeting in Vallecas.

"They describe a reality that I don't know. That we are exiting the crisis. That must be the crisis of the rich because for people down below nothing has changed," said Ortiz, a fragile looking but lively 62-year-old.

Spain, a nation of around 44 million, "only" has about 30,000 homeless people since family ties remain strong and many people survive thanks to the pension received by grandparents and government aid offered to children, he said.

Like the majority of Spaniards, Ortiz had a mortgage with a floating interest rate. His monthly payment jumped from €500 euros to €800 just as he lost his job.

His new part-time job as a street sweeper does not cover all his expenses. Ortiz has been able to keep his home with help from his mother-in-law, who shares her monthly pension of €460, and from his 31-year-old daughter.

For many others, 2015 is shaping up to be another difficult year.

"People have exhausted all their savings and financial aid. Suddenly they are no longer able to negotiate with the banks," said Ivan Cisneros of the Platform for Mortgage Victims, a grassroots movement that campaigns to protect ruined homeowners.

"People find work, but it is part-time or precarious, not something that allows them to pay for accommodation."

Home repossessions rose 13.5 percent in the third quarter over the same period last year to 6,787, according to the National Statistics Institute.

The problem is more severe in Spain than in other European nations since there is very little social housing, said Antonio Gonzalez Gordillo, a Socialist lawmaker in the Madrid regional government and a specialist in urban planning.

Only one percent of Madrid's roughly 2.6 million homes are public or social housing, compared with over 30 percent in cities such as Amsterdam, Berlin and Vienna, he added.

Back in Vallecas, participants at the weekly self-help meeting maintain their sense of humour.

One man gave out dozens of yoghurts that were donated by a supermarket.

"Their expiry date has passed. If they are a bit acidic, don't drink them," he said, causing the group to break out into laughter.