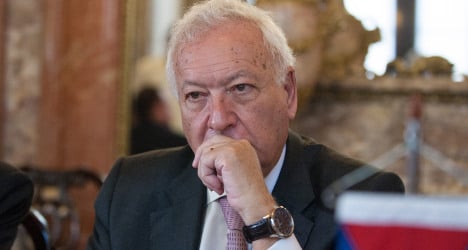 Spain took up its seat on the UN security council on January 1st which it will hold from 2015 to 2016.

On a trip to Egypt which will be followed by visits to Jordan, Palestine and Israel, Spanish foreign minister José Manuel García-Margallo stressed the danger of Isis in north Africa, particularly in Libya, where "the black flag is already flying in several cities".

He said the current security threat coming from the Middle East and north Africa is "a more complicated situation since the appearance of Isis."

"There is a high risk of contagion across the whole of north Africa, a serious threat to our national security," the Spanish foreign minister told Spanish daily, El País.

He also pointed out that, for Spain, Latin America, particularly Cuba, was obviously a priority.

García-Margallo said that the two remaining years of US President Barack Obama’s presidency were going to be "more active".

"The thawing of relations between the US and Cuba shows that he (Obama) wants to accomplish his foreign policy agenda," he said.

He said the US president's objective was to go down in history as the president who fought the most against nuclear proliferation, as evidenced by his strong stance in finding an agreement with Iran over its nuclear programme.