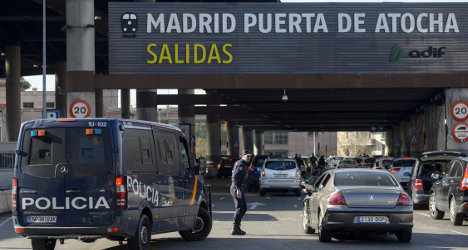 Police deviate traffic at the entrance to Madrid's Atocha railway station on Friday following a false alarm when a man threatened to blow himself up. Photo: Dani Pozo/AFP

The train from Madrid's southern Vallecas district was evacuated some 400 metres (440 yards) before entering Atocha station after a man carrying a backpack threatened to blow up the train.

The busy central station was also evacuated after the incident but reopened late in the morning on Friday.

The man — reportedly from North Africa — was arrested with police confirming he was not carrying explosives.

Catalan daily La Vanguardia reported his backpack contained only a bottle of water.

Spain's interior minister Jorge Fernández Díaz said the man was undergoing psychiatric treatment and had spent a week in a Madrid clinic in December.

On March 11th 2004, Al-Qaeda-inspired bombers blew up four packed commuter trains in Madrid, killing 191 people. Around 2,000 people were injured in the attacks.

Friday's false alarm comes a week after a man rammed a car loaded with gas bottles into the headquarters of Spain's ruling Popular Party in Madrid.

He claimed he was carrying 15 kilograms of the explosive ammonal — a mixture of ammonium nitrate and aluminium powder — and a number of timers.

However, initial analysis showed that while a substance found in the car was flammable, it wasn't an explosive.

Nobody was hurt in the attack.