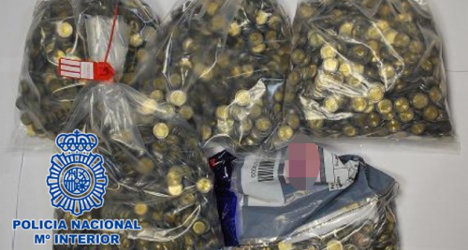 Three home workshops have been discovered by Spanish police in Madrid while the three people responsible for forging thousands of euros worth of €2 coins have been taken into custody.

They made the forgeries using everyday equipment like bottles of gas usually used in camping, precision drills and saws.

From their home workshops they had a capability to produce 12,000 fake coins a month over a period of five years, police said in a statement released on Tuesday.

During the search of the home workshops, police found 8,000 forged coins as well as 400 which were in the process of being made. They also seized moulds used in the making of the coins along with various other tools.

The coins were used in public transport ticket machines and went undetected thanks to their relatively high technical standard. The forgers used the fake coins in ticket machines in different locations around the city and never at the same time to avoid detection.

The three suspects are no stranger to forgeries, already having criminal records for forging 500 peseta coins before the introduction of euro coins and notes in Spain on January 1st 2002.