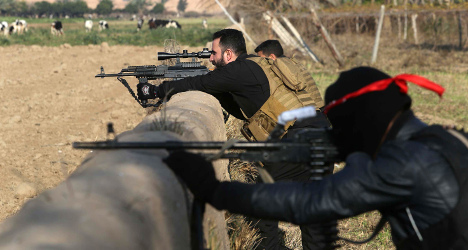 The man stayed in Spain for around a year to receive medical treatment for injuries sustained while fighting in Libya after which he returned to his home country.

He had originally come to Spain in December 2012 to receive medical treatment for a problem with his vision, sustained during fighting in Libya, staying until November 2013.

He was one of the first 52 Libyans to arrive in Spain in the midst of intense fighting in the North African country, having been flown to Spain by the Spanish state Agency for International Development Cooperation (Aecid).

An agreement between Spain’s Ministry of Foreign Affairs the Libyan Ministry of Health and the Committee for Injured Libyans, was designed to open a medical corridor between different countries to supply injured Libyans with healthcare they would not be able to receive in their country, broken by months of war between General Gaddafi’s forces and rebels.

Spanish authorities have uncovered that after returning to Libya, the man travelled to Syria then onto Iraq, where on October 20th he crashed a truck filled with explosives into a police checkpoint.

That day there were numerous acts of violence around the country, including truck bombings in Mosul and around Kerbala, where the Libyan man carried out his suicide attack against a police checkpoint in the north of the city. The action was attributed to Isis.

According to Spanish daily El Mundo, there is some concern among Spanish authorities that this case is not unique and that other Libyans who received medical treatment in Spain could return to the country to carry out terrorist attacks on Spanish soil.

Some of those who were treated in Spain went on to be radicalized by jihadists and are not only connected to Isis, but armed groups within Libya, sources claim.

Spanish security forces are fighting to combat terrorism putting a special emphasis on the radicalization phase.

In 2014 alone, Spanish police have arrested 40 people linked to terrorist groups, more than double the arrests made in 2013.

Top experts on Islamist radicalism from Spain's Royal Elcano international studies institute have also said the number of native Spaniards arrested on suspicion of terrorism offences had surged since the beginning of the civil war in Syria in 2011 and the ongoing violence in Iraq.