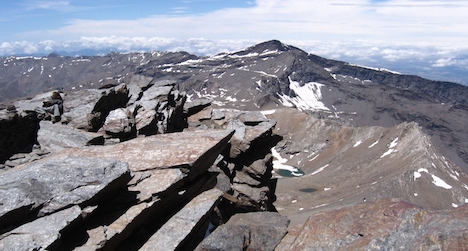 View from the summit of Mulhacén in the Sierra Nevada mountains. Photo: Carlos Serra/Wikimedia

Police discovered the body of the 60-year-old inside a shelter in Colado de Carihuela in the Sierra Nevada mountain range in southwestern Spain, police said in a statement.

She is believed to have died from hypothermia.

A ski resort worker found her companion, a 50-year-old Spanish national, nearby with "serious signs of hypothermia", the statement added.

Police said the pair appeared to have suffered a fall while descending the Pico del Veleta, the second highest mountain in the Sierra Nevada, which rise to the south of Granada.

They were reported missing on Sunday after they set out to hike in the area with two other people who told the authorities that they had gotten lost.