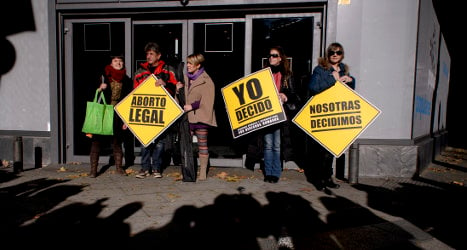 Demonstrators protests against proposed changes to Spain's abortion law which would have made access to the procedure much more difficult. Photo: Dani Pozo/AFP

A total of 108,690 abortions were carried out in 2013 according to figures published in Tuesday by Spain's health ministry.

The new statistics come three months after Spain shelved draft legislation which would have allowed abortions only in cases of rape which had been reported to the police or when there was a medically-certified threat to the mother's physical or psychological health.

Under current Spanish legislation brought in by the previous Socialist government in 2010, women in Spain have the right to abortion on demand up to 14 weeks into their pregnancy.

The drop in numbers was a reflection of the socioeconomic situation of the country with the departure of many woman of child bearing age bringing those numbers down, experts quoted by Spain's El País newspaper said,

Spain's introduction of the morning-after pill in 2009 had also played a roll, the daily reported.

Women in Spain also have the legal right to abort up to the 22nd week of pregnancy in cases where the mother's health is at risk or the foetus shows serious deformities.