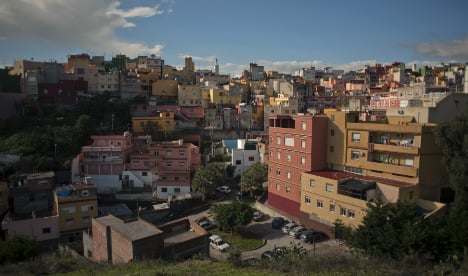 Ceuta and Melilla — two tiny specks of Europe at the northern tip of Africa which have the only two land borders between the two continents.

When he gets his load across the border from Ceuta to Morocco, Ibrahim will earn €30 ($37) for his labour.

Tolerance of this cross-border trade makes Ceuta and Melilla magnets for those on the Moroccan side of the fence, who jostle in tense queues for their turn to enter.

But the borders are a headache for Spanish police, whose duties range from chasing queue-jumpers with their batons to catching drug traffickers and suspected terrorists.

Critics complain that encouraging this undocumented cross-border trade reinforces the rich-poor split at this meeting of continents.

"Here there is just poverty and survival," said Mohamed Alami, a civilian steward supervising the chaotic queue in Ceuta.

Some 400 kilometres (250 miles) east, in Melilla, Naima Fakhri, 46, gets paid a euro for each of the thick blankets she carries home to Morocco on her back, leaning on a crutch since she twisted her ankle.

Today she has five blankets, tied in a bundle weighing 20 kilos. Previously, she could make two or three journeys a day. But tighter border controls imposed this year restrict her to one return trip, four days a week.

"It's disgusting. Sometimes the police hit me or stop me getting back across the border," she said, seated and wearing a headscarf and pink dress.

"But there's nothing else for me to do but come to Melilla."

Officials say the tighter controls are due to security concerns and efforts to renovate the border crossings.

Unemployment among Ceuta and Melilla's native workforce is more than 30 percent — among the highest rates in Spain.

Meanwhile, authorities say some 30,000 Moroccan traders and menial workers cross into each territory every day.

There are no official figures for the value of what officials call the "atypical trade" in merchandise across the border, but Spanish media have estimated it at more than 600 million euros a year in each of the territories.

"If people are earning a living that way, there is obviously a big difference in income between one side and the other," said the Spanish government's delegate in Melilla, Abdelmalik El Barkani.

"But if it means that thousands of families can support themselves from it, then it is welcome."

Shipping companies favour it over the neighbouring Moroccan port of Nador where taxes and import duties are higher, said Gonzalo Escribano, a researcher at the Royal Elcano Institute of International and Strategic Studies in Madrid.

Escribano said Spain tolerates the contraband trade to calm relations with Morocco, which claims sovereignty over the territories.

But he argued that the quick income from contraband lures Moroccans away from education and investment — a problem Spain and the European Union should help to ease, he said.

"It supports many people in Morocco but at the same time it is holding back long-term development there," Escribano said.

"In the short-term, the status quo is much more comfortable for both countries. In the long-term it is very harmful. It is a vicious circle that someone has to break."