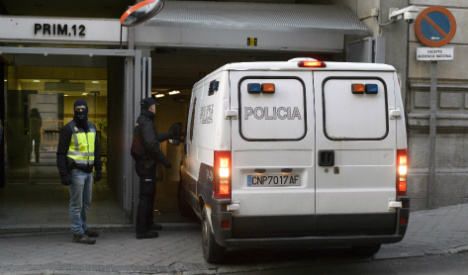 Vladimir Milisavljevic, already convicted for the killing of Serbia's then prime minister Zoran Djindjic in 2003, and three other members of the Serbian gang known as the Zemun Clan were accused of killing Milan Jurisic in a Madrid apartment in 2009 and trying to destroy his body in an electric grinder.

Milisavljevic was arrested along with Luka Bojovic, Vladimir Mijanovic and Sinisa Petric in February 2012 in Spain.

Milisavljevic was sentenced in absentia in 2007 to 35 years in prison for his role in the shooting of Djindjic in Belgrade, along with other members of the Zemun Clan.

The gang was made up of former members of "Arkan's Tigers", a Serbian paramilitary group notorious during the Balkan wars of the 1990s.

Milisavljevic on Tuesday was sentenced to 21 years in prison for gun possession, criminal association, concealing evidence and forgery.

Bojovic was acquitted of taking part in the murder of Jurisic, but convicted of criminal association and received an 18-year sentence.

Petric was jailed for 15 years and Mijanovic for five years.