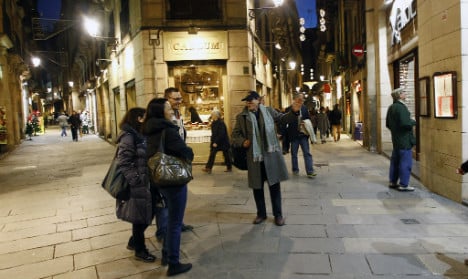 As well as filling them in on the history and showing them some nice views, Holgado, 64, gives visitors an insight into the poverty that has ravaged the Catalonian capital since the economic crisis struck.

He used to be a chef in a luxury restaurant in New York but came back to Spain and ended up homeless after suffering bereavements and a breakdown.

Now he works for Hidden City Tours, an agency that employs four guides who have lived on the streets.

Three visitors have joined Holgado today for a homeless-eye-view of the city, which attracts 27 million tourists each year.

"This square is one of the favourite spots of homeless people in Barcelona," he tells them as they reach the Plaza Sant Felip Neri, known as the site of a bombing in Spain's civil war.

"It's quite calm, fresh in the summer and not very cold in the winter."

Staring up at the square's renaissance facades and fountain, an old man with a weathered face and worn-out clothes takes a rest — just one of Barcelona's estimated 3,000 homeless.

A British woman based in Barcelona, Lisa Grace set up the agency after losing her job in marketing.

"We reveal a hidden truth," she said. "This is the Barcelona that you don't see in any of the tourist guides."

Barcelona is one of Spain's wealthiest cities, but has also been hit hard by the recent years of recession.

Its homeless population accounts for a tenth of all the homeless in Spain.

The two-hour tours reveal a city of soup kitchens and of overcrowded slum flats close to luxury hotels.

"It's really shocking," said one of the tourists in Holgado's group, Marcella Santocchi, an Italian visiting from London. "I didn't expect this in Barcelona."

"I've never gone on any touristic route. For me (conventional tours) are boring and cold, with a lot of people following a guide that doesn't care," said her Japanese friend, Tomoko Fukuzawa.

"But I saw this one, which is so different."

Originally from Salamanca in western Spain, Holgado, who has greying curly hair and thick glasses, finds it hard to talk about his time on the streets.

A little over 10 years ago, he was cooking for celebrities. He moved to Barcelona in 2004 after 30 years in New York. In 2008, Spain's economic crisis hit.

After his father and brother died, Holgado spent 10 months in hospital suffering from depression. But when he recovered he found himself homeless.

"You find yourself constantly exposed to louts, thieves, other homeless people with all kinds of addictions. You can easily sink into a rut you can't climb out of," he said.

By doing odd jobs he scraped together enough money to rent a small shared apartment. Now he hopes the tour agency will grow so he can live a more comfortable life.

The RAIS Foundation, a homeless charity, says the tours can also help to destigmatise the problem.

"Homeless people are normal people who suddenly suffer a series of misfortunes and end up on the street," said the foundation's joint director, Patricia Bezunartea.

Between them, the four guides of Hidden City Tours speak Spanish, English, French and German. They include a linguist and an architect who lost his home when he got divorced.

"If people knew the story behind each homeless person, a lot of stereotypes would be broken," said Holgado. "What has happened to us could happen to anyone."