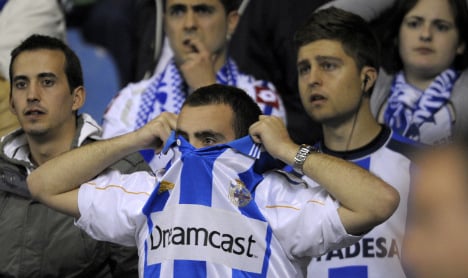 The supporters of Deportivo La Coruna in this picture have no connection to the story. File photo: AFP

A 43-year-old Deportivo La Coruna fan died after being beaten and pushed into a river on November 30 near Atletico Madrid's stadium before a match between the two sides.

A Madrid judge denied bail to the latest suspect, who along with three others is accused of involvement in the fan's death. He was arrested in Valencia, eastern Spain, the court said in a statement late Tuesday.

"The accused faces charges of homicide and taking part in a mass public disturbance for his involvement in the riot that caused the death of a Deportivo La Coruna fan," it said.

Another person arrested in the case was charged with taking part in the riot and released on bail.

Radical fan groups from both teams took part in the brawl near Atletico's Vicente Calderon stadium, with some rioters brandishing metal bars and knives.

More than 80 people were detained. Most have been charged and released.