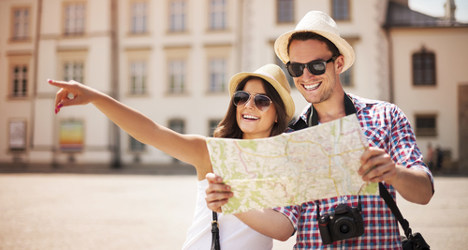 Picture of a couple on holiday: Shutterstock

Spain is on its way to receiving 65 million visitors in 2015 after the country notched up record figures for the period from January to November.

This year also saw the number of tourists who visited the country surpass 60 million for the first time, Spanish media reported.

The one nationality who are not visiting Spain in droves are the Russians whose numbers have fallen sharply due to the weak rouble.

The number of Russians holidaying in Spain went down by almost 10 percent, worrying Spanish tourism operators, especially in the area of luxury holidays, a particular draw to well off Russians.

The United Kingdom continues to be one of the biggest markets for Spanish tourism, making up a quarter of all visitors. Between January and November 14.3 million Brits visited Spain, while the French, Italians and Belgians saw the highest rise in the number of people visiting the country, a 10 percent rise for each nationality.

It is not only sun, sea and sangria that tourists seek, a big surprise in this year’s figures is the popularity of Spain’s capital city: Madrid has registered an 8.3 percent rise in the number of visitors.

Not all of the consequences of this increase have been welcomed however, with the antics of some tourists in central Barcelona causing protests by locals in the summer.

Residents from the tightly-packed seaside neighbourhood of Barceloneta took to the streets against the ravages of 'low-cost tourism’ and unseemly behaviour by visitors, many of whom are crammed into unregistered holiday apartments in the area.

Photographs of young men running naked through the streets of Barceloneta underlined an impression that the impact of tourism on central Barcelona was out of control.

The nightclub involved was forced to close for a year after while the firm that organized the bar crawl was forced to pay a €55,000 ($73,000) fine following a police investigation.

Island authorities, weary of Majorca's sun, sex and alcohol image, pointed the finger of blame at the “hoteliers in Magaluf who promote alcohol-fuelled tourism”.