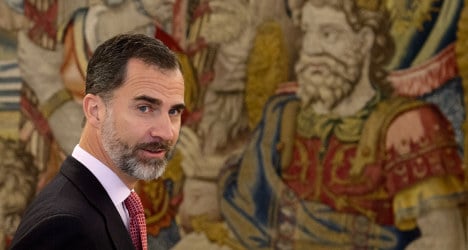 The lead-up to Felipe's first-ever Christmas speech has been hijacked by events beyond his control after a judge in Majorca confirmed on Monday that Princess Cristina would appear in court on two counts of tax fraud.

But speculation is growing that Felipe may now use his Christmas message to mention the fraud case, part of a larger investigation into alleged embezzlement of public funds on the part of her husband Iñaki Urdangarin.

The focus of that speculation rests on whether the King's sister, sixth in line to the Spanish throne, should now be pressured to give up that right to succession.

Cristina, embroiled in the corruption case since 2011 and isolated from the royal family since that time, has steadfastly refused to do so, believing such a move would imply guilt.

The princess has also refused to divorce Urdangarin, the other option that would help clear up the royal family's image, despite the insistence of third parties that she do so, according to Spanish daily El País.

The Royal Palace said in November that any renunciation of succession rights was entirely in Cristina's hands, an opinion backed by legal experts consulted by Spain's El Mundo newspaper.

The country's 1978 constitution makes no provision for such a situation, although it was not too late to draw up a law requiring Cristina to give up her right to the Spanish throne, Serrano Alberca told the daily.

However, with the princess set to appear in court in the second half of 2015, pressure is mounting on her to act in the interests of the royal family.

It would be a failure on the part of Felipe not to speak about the fraud case concerning his sister as it would jeopardize all of the king's hard work in bringing greater transparency to the institution said El País in an editorial on Tuesday.

Felipe's highly anticipated message will this year be broadcast on Catalan television channel TV3 after a year's hiatus, while Basque channel ETB will not show the speech for the second year in a row.

The Catalonian television channel TV3 did not air the king’s speech last year after employees went on strike at the exact hour of the broadcast.

Last year’s speech would turn out to be the last of King Juan Carlos, who announced his abdication as king of Spain in June.

The king’s speech is pre-recorded and broadcast across nearly every Spanish television channel on Christmas Eve at 9pm.

On Christmas Eve 2013, TV3 employees stopped working between 8.50pm and 9.20pm, the time all other Spanish TV channels were broadcasting the king’s Christmas message.

The Catalonian television channel lost around 90,000 viewers compared to the year before.

Basque public television however, in keeping with a policy it brought in in 2013, will not air the speech, the second year in a row the king’s words will not be broadcast to the autonomous Basque region of Spain.

Spaniards are expecting the new king to bring a new style to the traditional Christmas message, with the first aspect expected to change being the location.

This year, King Felipe will leave the comfort of his office and record the speech from a different location within the Zarzuela Palace, the official residence of Spain’s king and queen on the outskirts of Madrid, Catalan daily La Vanguardia reported.

On Monday December 22nd and Tuesday December 23rd, Spanish national broadcaster RTV will record the speech. The broadcaster says that two days are “necessary” in order to carry out all the tests and do as many retakes as are necessary.

Perhaps King Felipe will take some tips from his wife, Queen Letizia, who, before marrying the then Prince Felipe, was a journalist and news presenter on Spanish television TVE.