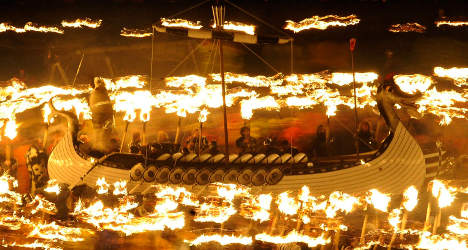 A Viking longship during the Up Helly Aa festival in the Shetland Islands, Scotland. File photo: Andy Buchanan/AFP

Dr Irene Garcia Losquino, who is hoping to secure funding for the research, aims to undertake a comprehensive archaeological examination of possible Norse communities in Iberia after a number of stone Viking anchors were washed ashore in Galicia following a storm in March.

Dr Losquino, who works in Aberdeen University’s Centre for Scandinavian Studies, said despite the existing written accounts of Viking raids along the northern coast of Spain, so far there was no academically accepted evidence of Norsemen living there permanently.

"I don’t believe in fate but I had been writing about Galicia at the time of the storm, and when I read that these anchors had washed up I dropped everything and went to investigate for myself.

"While there we found what looked like the remains of a longphort, which was a kind of Viking building that was quickly made as a defensive base of operations when raiding," she told Scottish daily newspaper, The Press and Journal.

The location of the possible longphort, or shore fortress, led Dr Losquino to believe that there would have been more permanent settlements close by, because Vikings would commonly only settle near a population nucleus or wealthy areas.

The area where the anchors were discovered is close to an old gold mine and religious settlements.

Dr Losquino explains that "Vikings made their mark on northern Spanish culture, people take part in three-day pilgrimages inland from the shore, which is what their ancestors would have to do to flee the raiding Viking hordes".

She is seeking funding for future expeditions to Spain to hunt for signs of Vikings from the British Academy, as well as from private sponsors.

She said: "I am preparing a dig in spring, we are going to several sites with metal detectors to try and identify signs of Viking life.

"People in these areas say that many of the Vikings chose to stay behind, which might explain why there are so many blue-eyed, ginger people living in those parts of the country."