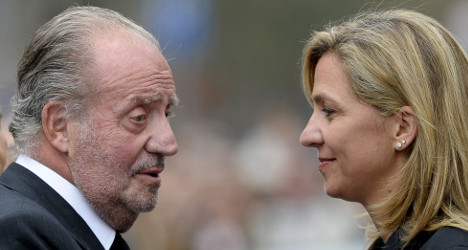 The hearing itself will take place in the second half of 2015 in Majorca, Spanish media are reporting.

If found guilty, Cristina, sixth in line for the Spanish throne, could face up to four years in prison, national daily El Mundo reported.

The charges against Cristina are part of a two-and-a-half-year investigation into the alleged embezzlement of €6.1 million ($7.5 million) in public funds from the sports charity foundation Nóos Institute, jointly directed by Princess Cristina's husband, the duke of Barcelona Iñaki Urdangarin.

Investigators suspect that a separate company jointly owned by the couple, Aizoon, served as a front for laundering embezzled money which Nóos had first secreted away in tax havens.

Questioned by Judge Castro in court in February, Cristina said she had simply trusted her husband and had no knowledge of his business affairs.

However, in early November, judges in Majorca ruled there was enough evidence to charge the princess with two counts of tax fraud, although earlier accusations of money laundering were dropped.

Monday's ruling comes despite repeated calls from the prosecutor overseeing the case, Pedro Horrach, that the charges against Cristina should be dropped. He has said the charges are the result of public pressure and there is insufficient evidence that the princess committed any crime.

The corruption scandal involving Cristina and her husband sent the popularity of the royals tumbling, and on June 18th the 76-year-old Juan Carlos, widely respected for guiding his country from dictatorship to democracy after the death of General Francisco Franco in 1975, tearfully abdicated the throne in favour of his son.

Cristina had enjoyed a reputation for a commitment to humanitarian causes, becoming an honorary president of a Spanish commission of UNESCO.

But "she is enormously competitive and obstinate," said Andrew Morton, a British royal affairs specialist who wrote a book on the female members of Spain's royal family.

The princess works for a charitable foundation run by La Caixa bank and oversaw its social programmes from Barcelona until the foundation posted her to Geneva last year.

The couple own a Barcelona mansion which reportedly cost around €6 million. It has since been impounded by the courts.

Cristina's lawyers say she is innocent of the accusations.

"When one person is in love with another, she trusts, has trusted and will carry on trusting that person come hell or high water," said one of her lawyers, Jesus Maria Silva.

The duke, too, denies wrongdoing.

Now Felipe has taken the throne, Cristina no longer represents the crown as part of the official royal family, which under Spanish law includes only the king, his spouse, his immediate forebears, his descendants and the crown prince.