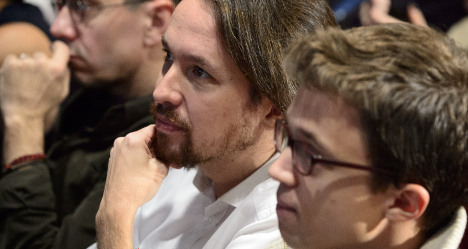 Podemos "present themselves as (being as spotless as the cleaning product) Mr Muscle but when you look behind the scenes they are covered in dirt, not to say crap", said PP spokesperson Rafael Hernando of the party which has taken the Spanish political scene by storm in recent months.

After emerging from nowhere to win five seats in European Union elections in May, the anti-austerity grouping has gone on to top a number of high profile polls looking at voter intentions.

In recent months, Spain's ruling PP have launched a series of attacks on the left-wing party headed up by charismatic leader and political sciences lecturer Pablo Iglesias.

The government has accused the group of populism while criticizing the young Iglesias and other top leaders of the party in the wake of reports they worked for a foundation which provided political consultancy services to the Venezuelan government when it was led by Hugo Chávez.

Top PP figure Esperanza Aguirre went on to accuse the party of supporting Basque separatist group Eta in a blog piece, while also claiming the regime in Venezuela had supported the party to the tune of €3.7 million ($4.5 million).

But in his recent comments in Seville Hernando was blunter, describing Podemos as a bunch of  "scruffy" people "who don't care about anything and want to destroy everything".

Podemos wanted only "rigged and made-to-measure questions instead of questions about how to illegally obtain grant money", the PP spokesperson said in reference to allegations that the party's de facto number two Íñigo Errejón failed to meet the terms of a contract for a project for Andalusia's Malaga University despite receiving €1,825 a month for that work.

That contract specified Errejón should spend 40 hours a week on site at the institution, but the the 29-year-old political scientist was actually based in Madrid with the professor overseeing the project saying he had green-lighted this arrangement.

In November, however, university administrators temporarily suspended Errejón from duty and cut off his salary.

Shortly afterwards Errejón admitted he had a made an error in not seeking formal recognition from the university that his private activities with Podemos were compatible with his work commitments.

"The PP will raise all study grants" but "not that of Errejón", Hernando said.

"We are not the party of Podemos ('We can'), we are the party of Hacemos ('We do') the PP spokesperson said, pointing to the fact the government planned to create half a million new jobs in the coming 12 months.

Speaking about the scandal recently, Pablo Iglesias said there had been "a campaign of defamation against the most visible faces of Podemos like the one deployed in earlier months in which the party was accused of receiving illegal funding and having relations with terrorist organizations".

Podemos, financed initially through crowdfunding, aims to renegotiate Spain’s debt-paying commitments so it can mitigate the impact of austerity policies on the population. It also backs a fixed living allowance for all citizens and the idea of a 35-hour week.

A Podemos government would halt evictions of mortgage defaulters and recognize a Palestinian state.

The hugely popular party has been seen by many commentators as a huge threat to Spain's two-party system.

Power in Spain has been held either by the Socialists or by the current ruling PP and its predecessors since Spain's return to democracy after the death of the dictator Francisco Franco in 1975.

The PP recently touted the possibility of a grand coalition with the Socialists in a bid to shore up power in the event it did not win an absolute majority. In a veiled reference to the threat posed by Podemos to Spain's two-party system, PP secretary-general María Dolores de Cospedal, commented that a coalition would be necessary "not to neutralize anybody…but to guarantee the governability of the country".

However, the head of Spain's socialist party said he was not in favour of such a move.

General elections are due to be held in Spain at the end of 2015.