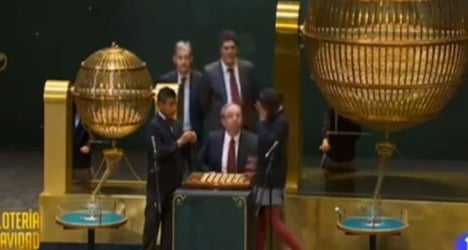 Marguette, dressed in her school uniform of blue blazer and grey skirt, was the first girl to take to the stage to sing the numbers in Spain’s unique Christmas lottery and burst into tears after tripping over her words.

Encouraged by the applause of the audience, she took a sip of water and continued, her fortunes picking up a couple of hours later, when she sang out the numbers of the second and fifth prizes in the lottery, in which Spaniards have a one in six chance of winning at least something.

This years' €4 million Fat One (El Gordo) top prize in Spain’s Christmas lottery was number 13437 and this year there was plenty of tension as it took longer to appear than ever before.

The unique tradition of singing the numbers dates nearly 200 years, when the orphans of San Ildefonso school in Madrid would sing the lottery numbers as they were drawn from the two large golden spheres.

No longer an orphanage, the school’s pupils continue to draw the numbers, singing them out as they go and the winners of El Gordo traditionally give a percentage of their winnings to the school.

Eleven boys and eleven girls aged 9 to 13 years old were chosen from the school to sing the lottery numbers on Monday December 22nd.

The Christmas lottery draw is one of the biggest events of the year in Spain, with the over three hour long event being televised live on Spain's national broadcaster.

Madrid seems to be the big winner in this year’s lottery, with the majority of the winning tickets being sold in a lottery shop on Calle Zurbano according to Spanish newspaper 20 minutos.

Some of the 40 staff of El Metidero de la Villa, a restaurant across the road from the lottery ticket seller, gathered at the eatery to celebrate their prize: they bought 15 décimos (or €20 tickets) between them, which has won them €150,000 each, they emotionally explained.

The locations of this year's prizes can be seen in the map below.