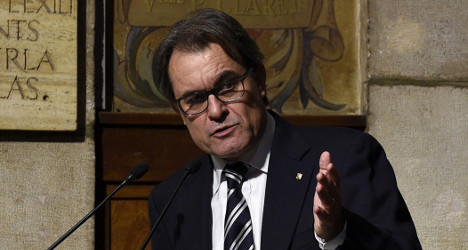 Prosecutors have accused Catalan president Artur Mas of civil disobedience, abuse of power and embezzlement of public funds for pressing ahead with the vote. Photo: AFP

The Catalonia High Court said that Mas was under judicial investigation for flouting a injunction against holding the symbolic vote on November 9th.

Prosecutors have accused him of civil disobedience, abuse of power and embezzlement of public funds for pressing ahead with the vote.

If charges were brought against him, Mas could risk a jail sentence of several years and a ban from public office.

"Personally I do not understand these accusations, that someone should take you to court for organizing a vote," Mas said on Monday ahead of the court's announcement.

"But I fully respect the courts' decisions."

An injunction by Spain's Constitutional Court had forced Mas to water down his plan for an official vote. Instead the November 9th ballot was merely symbolic and organized by volunteers.

But prosecutors allege Mas and other Catalan officials used their influence as well as public money to hold the ballot.

Roughly 80 percent of those who voted — some 1.86 million people — favoured independence.

Mas is in favour of independence and wants a full referendum on it, but Spain's conservative government has vowed to prevent any breakup of the country.

Pro-independence feeling has surged in the rich region over recent years, fanned by disagreements with the central government over Catalan sovereignty and the economic crisis.

However a poll by Mas's regional government published last week indicated for the first time that those opposed to independence narrowly outnumbered those in favour.