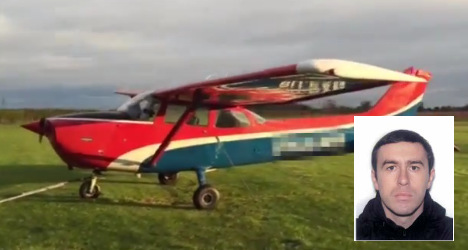 Paul John Scott, from Liverpool, was apprehended on Tuesday night when he flew into East Winch Airfield in Norfolk from the Netherlands. Screen grab: Youtube/Steve Ivie /National Crime Agency

Paul John Scott, aged 32, from Liverpool, was apprehended on Tuesday night when he flew into East Winch Airfield in Norfolk from the Netherlands in a Cessna 170. The Dutch pilot was also arrested, according to a statement from the UK’s National Crime Agency.

One of the agency’s most wanted fugitives, Scott is a suspected member of a Merseyside-based organized crime group that plotted to smuggle up to 40 tonnes of drugs into the UK. He was also being sought by the Guardia Civil in Spain in connection with the murder of British national Francis Brennan in Alicante.

Brennan, himself a fugitive, fled the UK ahead of trial where he was likely to be found guilty of stabbing someone during a Swedish House Mafia gig in Milton Keynes in 2012. His body was found on an Alicante beach in April 2014 wrapped in a bin bag. A 'criminal fraternity' that Brennan had links to was believed at the time to have be behind the murder.

The arrest comes two weeks after the NCA launched a manhunt for Scott and issued an appeal on BBC One’s Crimewatch show.

Officers from Norfolk Police and Border Force were waiting for the aircraft to touchdown as suspicions had been raised ten days earlier when the pilot landed in the same airfield in a different aircraft.

Scott was charged with conspiracy to import cocaine. He appeared at Liverpool Magistrates Court on Thursday and was remanded in custody until his next court appearance at Liverpool Crown Court on January 2nd.

Greg McKenna, North West Investigations Branch Commander, said: "Paul Scott actively sought to evade arrest but thanks to a member of the public reporting their suspicions and great work by our partners his days on the run are over."

The arrest of Scott comes during the same week that another man has been sentenced for his role in the conspiracy. Kevin Jennings, aged 51, from Huyton, Liverpool, was jailed for 23 years today at Liverpool Crown Court.

As part of the NCA investigation 25 members of this international criminal network have received sentences totalling over 270 years.

The Dutch pilot, who was also arrested on suspicion of money laundering, has been bailed pending further enquiries.