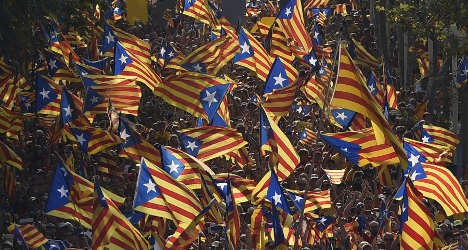 The poll carried out in early December by the Catalan government research institute, the CEO, reveals that a very slim majority of people in the region favour staying with Spain.

The result — the first of its kind since 2012 — is  a blow to the regional government of Artur Mas, which campaigned through most of 2014 to be allowed to stage a non-binding poll on independence despite staunch opposition from Madrid.

Mas eventually had to make do with a symbolic vote on November 9th which saw around 2.3 million people vote out a total estimated 5.4 million eligible voters. Of those voters 80 percent said yes to independence.

The conservative government in Madrid labelled the vote a farce while Mas called it "a total success".

But in further bad news for Mas and his government, when the CEO asked people what kind of state structure they wanted for Catalonia, they found a fall of nine percent in the proportion of people who wanted to see Catalonia become an independent state — down to 36.2 percent in the latest poll compared with 45.3 percent in October.

Meanwhile, the number of people who favour Catalonia becoming a federal state within Spain has risen from 22.2 percent in October to 28.9 percent.

Of those questioned, 21.8 percent wanted Catalonia to continue being an autonomous community.

In terms of the 2015 general election, 20.4 percent of people are planning to vote for newcomer political party Podemos, which could prove a serious threat to Spain’s established political parties as it gains popularity throughout the country.

The study, which took place from December 9th to December 13th, asked 1,100 people aged 18 and over their views on the current political situation in Catalonia.