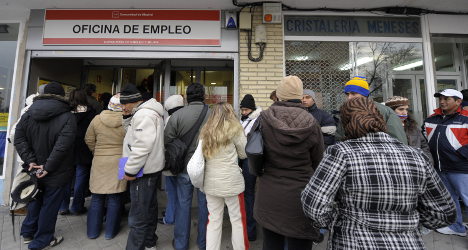 A queue of people waiting at an employment office in Spain. File picture: Philippe Desmazes/AFP

Playing on the current desperation of many of Spain’s unemployed, the gang tried to recruit potential traffickers from unemployment queues in the Spanish region of Murcia.

The gang worked with an Argentinian middle-man, who approached people waiting in unemployment queues and offered them money, new clothes, a passport and airline tickets, as well as a trip of several weeks to different countries in South America, in return for bringing cocaine to Spain.

Before travelling to South America, they were moved to Madrid where they were given accommodation and trained on how to behave during their journey.

The gang were also trafficking methamphetamine into Japan where they could sell the drug for considerably higher prices than in Europe. They disguised the drug as sweets in an attempt to evade detection by customs. Twelve people have been arrested in Spain and two in Japan while 8.5 kilograms (19lbs) of methamphetamine has been confiscated.

The group recruited traffickers from the US and Europe to take the drug into Japan, because these nationalities are subject to fewer controls when entering the country, according to Spanish newspaper El País.

On December 3rd, Spanish police picked up two Nigerian nationals in Barcelona who were carrying a travel bag which contained four packets of chocolates, altogether 160 units of methamphetamine as well as another 2.6kg of narcotics.

During a search in Madrid, police discovered another 20 ready-made 'chocolates' containing 1.5kg of methamphetamine and 600g of cocaine as well as other instruments related to drug trafficking.

The route through Spain to Japan was a relatively new one for the international group, who produced the drug in Nigeria before taking it on its international journey.