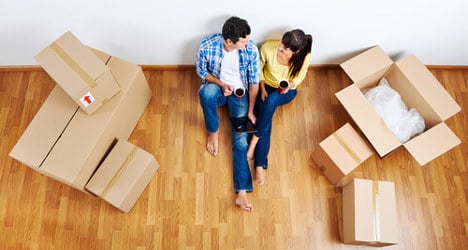 The latest quarterly report from Spain’s youth council (the CJE) reveals that only 22 percent of people under the age of 30 have managed to leave home to buy or rent an apartment for themselves.

According to the CJE this figure shows "the fragile situation young people face in the labour market and the tough housing market conditions that make buying a house impossible for the majority of young people".

The report's aim is to periodically assess the social and economic conditions of young people in Spain with a particular focus on work and housing.

It shows that young Spaniards would have to set aside 61.2 percent of their salaries in order to be able to buy a house and revels that they would need to earn 104.09 more than what they are currently bringing in to be able to afford a mortgage (the average amount should be about 30 percent, according to the report's authors).

"To leave home is a utopia" for young Spaniards, says Héctor Sanz, president of Spain’s youth council, who has called on the Spanish government to "invest and implement labour reforms that guarantee rights, quality and decent conditions in the employment of young people".

"Job insecurity and exclusion from the labour market are the main reasons young people cannot leave home," he added.

The CJE report also stresses that over qualification has become a key feature among young Spaniards: 55 percent are working in a job for which they are overqualified.

But not all young Spaniards are desperate to leave home and branch out on their own.

According to a 2012 report by the anti-drug addiction association FAD and Caja Madrid’s social institute, young Spaniards do not want to leave the family home "if that involves losing quality of life".

Those young people also said they didn't feel their freedom was being curtailed by staying put as parents were now choosing to give their grown-up children more space and liberty within the family home.