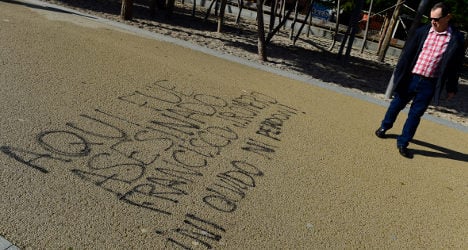 A man looks at a message reading "Here Francisco J. Romero was murdered. No forgetting no forgiving" on December 1st. Photo: Pierre-Phillipe Marcou/AFP

Police detained five more people on Wednesday over the riot, one in Madrid and four in the northern city of Gijón, police sources said, a day after 36 people were arrested as part of the probe, including the two men suspected of causing the death.

Among those arrested is a soldier who belongs to the Military Emergencies Unit, a branch of the armed forces that provides disaster relief, and a Guardia Civil police officer, a source close to the investigation said.

A 43-year-old man died after being beaten and pushed into a river in the brawl in which dozens of rioters rampaged with metal bars and knives near Atlético Madrid's Vicente Calderón stadium on November 30th before the club's match against Deportivo La Coruña.

A video camera captured the moment when the man — a member of the Deportivo hardcore fan group Riazor Blues — was heaved over the embankment into the freezing river by his adversaries.

The two men who were detained on suspicion of being responsible for his death are a taxi driver from the Madrid suburb of Parla and a 21-year-old man from Alcobendas, just north of the Spanish capital, Spanish media reported citing sources close to the investigation.

Medics said at least 11 other people were lightly injured, including a police officer, in the brawl.

Police took 21 people into custody on the day of the brawl, all members of radical fan groups from Deportivo and Atlético, as well as two other Madrid clubs, Rayo Vallecano and Alcorcon. All were released with charges of participation in a mass brawl.

Atlético Madrid have banned flags with references to the ultra group Frente Atlético in their stadium following the death while Deportivo La Coruña closed part of its stadium where members of the Riazor Blues usually gather.

Spanish football authorities and the government have vowed to banish members of violent and abusive supporters' groups known as "ultras" from stadiums and their surroundings following the brawl.

Spain's Football Federation and the government-controlled Higher Sports Council have said tougher sanctions for clubs over violent behaviour by supporters will come into force before the end of the year.

Closing off the areas inside stadiums where "ultras" gather and stepping up efforts to prevent violent groups from gathering near stadiums on match days are among the steps being considered.

Two Paris St Germain supporters were stabbed outside the Nou Camp stadium following Barcelona's victory over the French side in the Champions League last Wednesday.