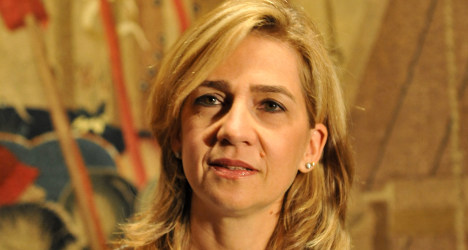 The error occurred after Princess Cristina mixed up the order of two numbers in a bank account number. Photo: Nicholas Kamm/AFP

The judge in the case known as the Nóos affair, José Castro, informed the Spanish princess she had deposited the money into the wrong bank account — that of a Barcelona court rather than the Majorca court which is investigating her.

The error occurred after Princess Cristina accidentally switched the order of two numbers in the legal account number.

Many Spaniards took to Twitter in surprise, saying that they had always thought older sister, Elena, was the stupid one:

Another user of the social media platform, @franmcamacho, tweeted “I’ve checked my bank account and I wasn't the lucky one who Princess Cristina made the deposit to. When I was little, I always thought the stupid princess was Elena.”

Even North Korean leader Kim Jong-un weighed in on the controversy, or at least a parody account claiming to be him did so:

“I’ve heard that Princess Cristina put money in the wrong bank account. Now how will Elena go out in public without her tutor?”

The princess paid the €587,413 ($729,500) public liability bond after a recent demand from the public prosecutor in a long-running corruption case.

The sum totals half the funds allegedly obtained illegally via Aizoon, a company Cristina jointly held with her husband Iñaki Urdangarin and which investigators say was used as a front for laundering public money embezzled from the Nóos charitable sports foundation.

Cristina is still facing two charges of tax fraud in the case which has damaged the Spanish monarchy. A judge is set to decide before Christmas if the charges will stand or be dropped.

“I've had an idea for a startup which consists of Princess Cristina putting €600,000 in my current account.”