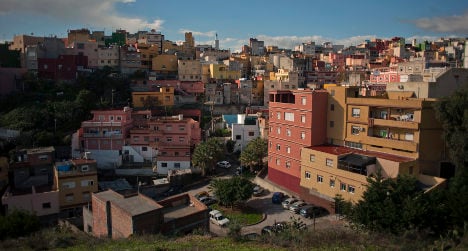 A general view of El Principe district in Ceuta, home to 87,000 people, 99 percent of whom are Muslim. Photo: Jorge Guerrero/AFP

Aisha has lived all her life in one neighbourhood in Spain's African territory of Ceuta, but now she is willing to move — even to the war zone of Syria.

"I would go and live with my family in the Islamic State in Syria, and if my husband died there in combat, I would accept it," said the mother-of-four, dressed in a black hijab, who asked for her real name to be concealed.

Her home district of El Principe in this European enclave of 87,000 people on the tip of Morocco has a reputation for hardship — and a new, growing one for Islamic radicalism.

Police on Tuesday raided a gang they suspect recruited 12 women online and sent them to join the violent extremist group calling itself Isis, which controls parts of Syria and Iraq.

Five of the suspects were arrested in Barcelona, Ceuta and Melilla, Spain's other north African territory, to the east. Two were detained in Morocco, close to the border with Ceuta.

Security sources say up to 100 radicals are thought to have been recruited in Spain and send to Iraq and Syria.

Last August, police detained two females — a 19-year-old from Melilla and a girl of 14 from Ceuta — who were caught trying to cross from Melilla into Morocco, suspected of heading for Syria.

"My pupils have told me that many times Syrian and Saudi elders have come to give conferences here," said Veronica Ribera, a teacher in El Principe's high school.

"We see young girls switching in a fortnight from the headscarf to the niqab," an Islamic veil covering all but the eyes, she said. "We know there is someone behind it, radicalizing them."

The 14-year-old girl arrested in Melilla in August "went from a bikini to a hijab, just like that," said one local person who knew her.

Officials have previously said one of the best-known jihadist suspects in Spain, Mohamed Hamdush, met his wife online before she travelled to Syria to marry him. He made headlines for posting a photograph on Facebook of himself posing with five severed heads.

Authorities in Ceuta say families there have reported at least 15 people missing who they suspect were recruited by jihadists. Among them is Lubna, 21, who surprised her parents by disappearing, an intelligence source said.

"She moved her clothes out of her house bit by bit and then left without a word," said the source, showing a photograph of the girl with a little red suitcase.

It was taken by a security camera at the Spanish airport of Malaga, from where she is thought to have flown to Turkey and from there travelled to Syria.

Such news has put locals in El Principe on edge.

"I am afraid for my children — of drugs, of crime and of the other thing," said one Ceuta native, Fatima Sohora, 42. Like many in El Principe, she dared not pronounce the word "jihadist".

For local leaders, Ceuta's poverty makes it ripe for radicalism.

"There is no work. The younger generation has no future. This is no man's land," said Isma Mohamed, a neighbourhood leader.

"People here are fed up of being stigmatized. There are closed pockets, but not all the district is radical, far from it." Authorities fear that Ceuta and Melilla, with their vulnerable populations and volatile border crossings to Morocco, could offer extremists a strategic base for attacks in Europe.

"What we fear is not so much what is happening in the mosques," said one security source. "It is the lone wolf who could grab a car and drive it into a crowd."