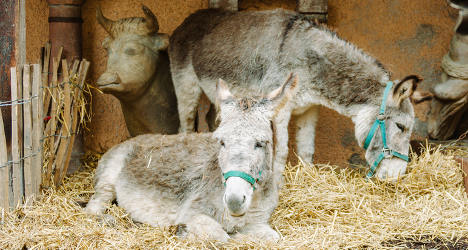 File photo of donkeys in a nativity scene: Shutterstock

The 38-year-old was arrested after he jumped over a fence and leapt on to the donkey, named Platero, who was part of a nativity scene in the town of Lucena, near Córdoba, Spanish TV station La Sexta reported on Wednesday.

Platero, just months old, who, along with the other animals in the nativity, was not meant to be touched by the public, died two days later.

Photographs of the December 10th incident, which occurred right in front of Lucena town hall, have been shared widely on social media.

Lucena's local council ordered a veterinary report to establish the donkey’s cause of death. If that report concludes the animal's death was caused by the man sitting on it, legal action will be taken, the council said.

The town hall investigation was launched following a complaint by the animal rights wing of political party Podemos and the Association for the Defence of the Donkey (Adebo).

“The donkey was literally squashed by the man,” the groups said in their complaint.

Local police said in a statement on Wednesday that they had instigated their own investigations into the incident without receiving any form of official complaint.

The animal rights group Peta said there was "no excuse for the pain that this donkey endured from his internal injuries or for his horrible death".

Organizers of the living crib "now have the blood of this poor donkey on their hands", Peta said in a statement.