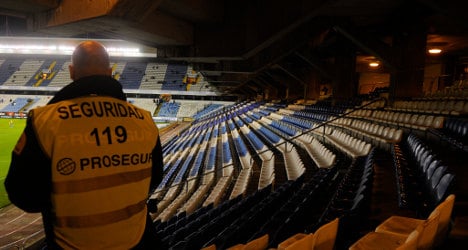 A security guard guards the empty stands of the ultras Riazor Blues at the Riazor Stadium in Coruna on December 3rd. Miguel Riopa/AFP

Police arrested 30 suspects who are thought to have participated in the November 30th clashes near the stadium of the Atlético Madrid football stadium.

The arrests took place in Madrid, Ávila and Toledo on Tuesday morning.

Among those arrested are two men who are thought to be directly responsible for the attack on Francisco Javier Romero Taboada, aka ‘Jimmy’, which led to the death of the lifelong Deportivo fan.

All those arrested are part of the group Frente Atletico, a group of 'Ultras', or organized hardcore fans.

The violent death of Taboada, who was beaten and thrown into the Manzanares river, later dying in hospital of cardiac arrest, has once again put the spotlight onto football violence in Spain.

The incident has also exposed the fact that many of these Ultra groups (between 20 and 30 percent according to Spanish police) are ‘camouflaged’ under the protection of Spanish football clubs, given almost VIP fan status in exchange for livening up stadiums with their chants, banners and slogans, according to Spanish newspaper El País.

The Spanish government’s response to the fan’s death was to order the sacking of the security heads of football clubs Atletico Madrid and Deportivo La Coruña.

"I have decided to order the dismissal of both clubs' security coordinators as a measure of joint responsibility in the person's death and the violent acts in the streets of Madrid," junior security minister Francisco Martínez said on December 10th.