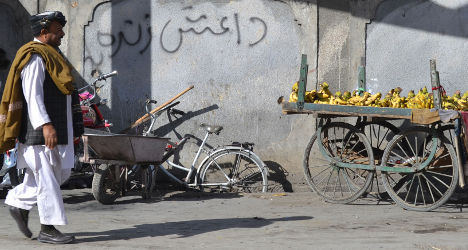 A man walks past graffiti which reads Daesh, the arabic acronym for Islamic State (IS), in Quetta, Pakistan in November. Photo: Banaras Khan/AFP

Spain's interior ministry said four women, one of them a minor, and three men were arrested in Barcelona, Spain's North African enclaves of Ceuta and Melilla and in the nearby Moroccan town of Castillejos.

"All of the arrested are accused of forming part of a network that recruited and sent women to the  Syria-Iraq front to the terrorist organization Daesh," it said in a statement, using a term used by many governments use to call the militant group Isis.

Police were searching six homes as part of the operation, which was carried out in cooperation with Moroccan security forces.

She had left Chile at the age of 16 and hadn't returned, according to the deputy secretary for Chile's interior minister Mahmud Aleuy.

The arrests comes just days after a judge in Madrid revealed a mosque in the city was being used as a hub of operations for a cell recruiting fighters for Isis.

That is fewer than the hundreds from Britain, France and Germany who are thought to have joined Islamic State, which controls controls large swathes of Iraq and Syria and has killed several western hostages.

But the relatively sudden emergence of the phenomenon has shocked Spanish authorities, who have arrested dozens of suspects accused of planning to join Isis.

Spanish police in August detained a 14-year-old girl and a 19-year-old woman in Melilla suspected of trying to join Islamic extremists fighting in Iraq and Syria.

The two Spanish-governed enclaves of Ceuta and Melilla are Europe's only land borders with Africa.

The Spanish government has said it fears battle-hardened Islamist fighters may return to Spain from Syria and other conflict zones under the influence of groups inspired by Al-Qaeda, posing the threat of attacks.

Spain this year marked the 10th anniversary of the March 11, 2004, Al-Qaeda-inspired bombing of four packed commuter trains in Madrid, which killed 191 people.