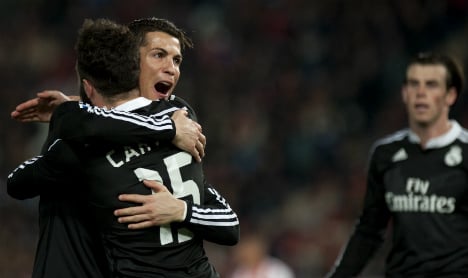 In their final La Liga game of 2014, Los Blancos stretched their lead over Barcelona, who travel to Getafe on Saturday, at the top of the table to five points.

First-half goals from Isco and Gareth Bale either side of Verza's stunning equaliser sent the visitors in ahead at half-time, but they needed a big save from captain Iker Casillas when he parried Verza's penalty on the hour mark.

Ronaldo then sealed the win when he turned home crosses from Karim Benzema and Dani Carvajal to take his La Liga tally to 25 goals this season.

"Almeria fought hard and we had a lot of problems during the game as we sought to keep possession. Only at the end of the game were we able to control the ball well and find the goals we needed to finish the match," said Carlo Ancelotti of his side's victory.

"Casillas managed to save the penalty in what was a defining moment, and thereafter that it was a little bit easier for us.

"We've had an unforgettable year, winning a lot of titles, especially La Decima (10th Champions League title), and are in a good position in the league. We now go to the Club World Cup with the intentions of winning it."

The hosts, with caretaker coach Miguel Rivera in charge following Francisco Rodriguez's dismissal earlier this week, came out of the blocks quickly, and almost made the perfect start.

First Pepe and then Carvajal blocked goalbound close-range efforts from Fernando Soriano and Sebastian Dubarbier within the first three minutes.

After gaining a foothold in the game, Madrid then saw a Toni Kroos volley from outside the area deflected onto the bar by Fran Velez, before Bale failed to find an unmarked Benzema in the six-yard box after breaking down the Andalusian side's left on the quarter-hour mark.

With the hosts defending resolutely, Madrid's frustrations began to show, with Bale guilty of a silly challenge that brought a yellow card from referee Alfonso Alvarez Izquierdo.

As ever with Madrid, the calibre of player they possess means they can conjure a goal out of nothing, and that is exactly what happened as they took the lead on 33 minutes.

Benzema's cross was too long for Ronaldo, but Isco was able to control the ball on his chest before curling an effort beyond the outstreched Ruben Martinez in the Almeria goal from the edge of the box.

This brought a reaction from the home side, who pushed on aggressively and were rewarded for their pressure seven minutes from the break as Raphael Varane's headed clearance fell to Verza, who fired a first-time effort into the bottom corner 25 metres from goal to spark elation in the stands.

The joy was short-lived, however, as fewer than three minutes later the league leaders retook the lead through a Bale header to go in at half-time in front.

Eight minutes after the restart, Bale had a chance to double the visitors' advantage as he produced a trademark burst through the heart of the Almeria defence, only for his right-footed effort to fly past Ruben's right-hand post.

Moments later Ruben then produced a full-length stop from a Ronaldo effort as the European champions sought to put the game to bed.

While they only trailed by one goal, the hosts always remained in the game, and they had the opportunity to draw level 15 minutes into the second period as Marcelo brought down Edgar Mendez in the area, but Casillas guessed correctly and parried Verza's spot-kick to safety.

Nine minutes from time Ronaldo sealed the win after combining with Benzema, and the Portuguese then put the gloss on the scoreline a minute from the end when he thumped home Carvajal's cut-back.