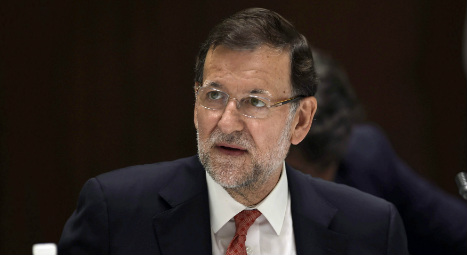 Responding to calls for constitutional reform to answer Catalan separatists' demands, Rajoy vowed that his conservative Popular Party would ward off any threat to the unity of Spain and tried to shift the focus to the tentative economic recovery.

"We will support any future reform that is necessary, but for the Popular Party, national sovereignty is not negotiable," he said in a speech to party leaders.

"What Spain needs now is more economic and social reforms to improve people's lives and overcome the crisis definitively, and there will be more," he said, also promising further anti-corruption measures, without elaborating.

Rajoy did not name Catalonia, but the speech was one of his most high-profile statements on the constitutional question since the region held a symbolic vote last month on whether to break away from Spain.

Rajoy has consistently vowed to preserve the unity of Spain as it recovers from six years of economic crisis that have left it with a current unemployment rate of nearly 24 percent.

Faced with lawsuits over the banned symbolic polls on November 9, Catalan leaders are now debating the next step in their drive for a full vote on independence for their rich northeastern region.

The opposition Socialist Party also opposes Catalan independence but has called for a reform to the system of devolved regional governments in Spain's 1978 constitution to answer separatists' demands.

Rajoy has not ruled out a constitutional reform but rejects any bid to break up Spain. He said on Saturday he was set on integrating the country more closely with the European Union.

"Our constitution has been reformed twice and it will doubtless be reformed again, as many times as required in the general interests of the Spanish people or for developing the common European project."