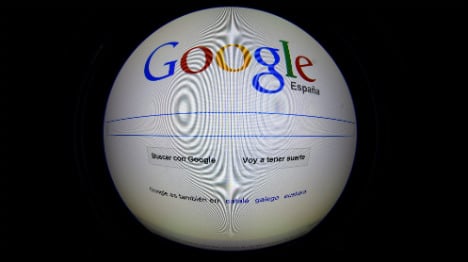 The US giant announced Wednesday that it will close Google News in Spain on December 16 because of the law which takes effect in January and forces it to pay news outlets whose content it publishes, even if in snippets for aggregation.

"The big losers will be media firms themselves, which, with the disappearance of their news from the search engine, will lose traffic to their pages," Spain's web-surfers' association, Asociacion de Internautas, said in a statement.

The law has been dubbed the "Google tax" in Spain but it would also apply to other big web companies with pages that reproduce and link to news content, such as Yahoo.

The Spanish culture ministry said it would press ahead with enforcing the law despite Google's move, insisting it "does not obstruct freedom of information".

"This situation will cause many closures" of Spanish internet firms, the president of the web-surfers' association, Victor Domingo, said Thursday.

The Association of Spanish Newspaper Editors, known by its Spanish-language acronym AEDE, appealed for Spanish and European authorities to find a solution.

Google is the "real doorway to the Internet" in Spain and the closure of Google News "will without a doubt have a negative impact on citizens and Spanish companies," it said in a statement Thursday.

"We always favoured negotiations with Google to reach agreements that are profitable for the two sides in different areas," it added.

Google has been at odds for years with several European countries over regulatory, commercial and copyright issues but the decision to close Google News in Spain is one of the heaviest blows to date.

Since 2010, Google has been under investigation by the European Commission over complaints that its search engine, the world's biggest, squeezes out competitors.

In October a legal battle with German publishers forced Google to remove from its search results news snippets drawn from news sites.

One of those companies, Axel Springer, capitulated to Google weeks later, letting it post snippets for free. It said it could not resist Google's dominance in online news.

The planned closure of Google News comes as Spanish media have been hit hard by a prolonged economic downturn as advertising spending has plunged.

Dozens of newspapers and other media have shut down and thousands of journalists have been laid off in the last four years.