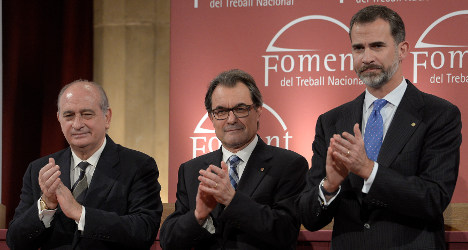 "We cannot allow weakening or division as the world moves towards greater integration, reflecting the increased interdependence that defines our societies and economies," the monarch said in his speech to Catalan business leaders in Barcelona.

The king, who came to power in June, was also addressing regional president Artur Mas, who now hopes to organise early elections in Catalonia by the end of 2016 centred on independence from the rest of Spain.

"More than ever we must unite our strengths and strategies," he said, also stressing the need for a spirit of "cooperation and solidarity."

Of the 2.3 million Catalans who took part in the symbolic vote on November 9th, around 1.9 million voted in favour of independence for the region, which is home to 7.5 million and accounts for around a fifth of Spain's economic output.

The majority of anti-independence voters stayed at home. Mas earlier welcomed the king but without addressing the controversial issue.

The king, who made a point of also speaking in Catalan, defended the Spanish constitution, which is based on the division of power between the central government and regions, emphasising that it also guaranteed the "cultural, territorial and political diversity of Spain".

Support for independence is strongest in rural areas, but it is less strongly rooted in the industrial zone around Barcelona and other key coastal areas.