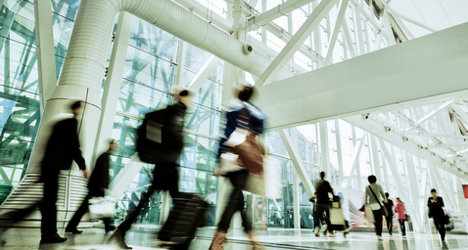 A total of 42,685 Spaniards left the country in the first six months of , of whom 27,026 were Spanish born, the preliminary figures from Spain's national statistics agency show.

Among the people who emigrated from Spain during the first half of 2014, 42,685 were Spanish citizens while 163,808 were foreigners.

While the number of people leaving in the first half of 2014 was down, immigration rose by 2 percent between January and June, with 156,066 people moving to Spain from other countries. Of this group, 17,951 had Spanish nationality.

The figure suggest the exodus of foreigners Spain has witnessed throughout its economic crisis appears to be slowing, perhaps due to Spain’s economic recovery.

The institute recorded 5.43 million unemployed in Spain at the end of September, yielding an unemployment rate of 23.67 percent.

The high figure reflected the lingering impact of the busting of a construction bubble in 2008, which sparked five years of stop-start recession in the eurozone's fourth-largest economy.

Spain's economy grew by 0.5 percent in the third quarter compared with the previous three months, its fifth consecutive quarterly growth, according to final figures from the statistics office released on Thursday.

The economy grew by 1.6 percent over the past 12 months, up from the 1.3 percent year-on-year increase registered in the second quarter.