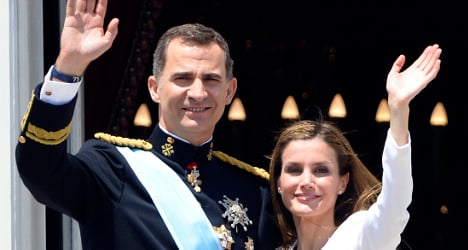 Spain's King Felipe VI and Spain's Queen Letizia on the balcony of the Royal Palace in Madrid on June 19th. Photo: Gerard Julien/AFP

The king's proclamation was touted as a muted affair with few foreign dignitaries present and a low-key parliamentary setting.

The site also reveals the royal family — Europe's cheapest — spends €57.838 a year on photographic services and €38,115 on monitoring of media coverage.

Also among the costs outlined is the €72,600 a year paid to the lawyer José Manuel Romero Moreno, who provided advice to the royals when news of possible corruption on the part of the king's sister Cristina and her husband Iñaki Urdangarin broke.

Cristina has been charged with tax fraud with a judge to decide before Christmas if she will face court, while a prosecutor has called for her husband to spend nearly 20 years behind bars for allegedly embezzling funds from a non-profit sports charity.

The royal family has struggled in the face of several scandals in recent times. Apart from the fraud case involving the king's sister, former king Juan Carlos was harshly criticized for a luxury hunting trip in Botswana at a time when Spaniards were struggling.

Juan Carlos surprised Spain with his decision to abdicate in June, a move that saw many Spaniards calling for a referendum on the future of the monarchy.