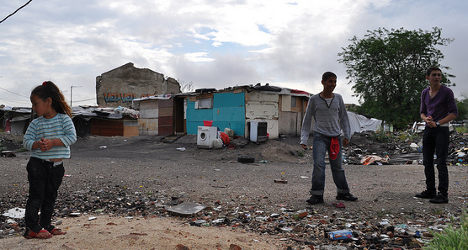 The charity Save the Children wants the demolition of shacks in Madrid's El Gallinero area to be stopped until a long-term housing solution for residents can be found. Photo: Rafael Robles

Madrid's El Gallinero neighbourhood is a world away from the bustling streets of the city centre. Rubbish litters the streets while armies of rodents and insects infest the temporary shacks that make up the slum.

The area is home to around 300 Romanian Roma children and their families in conditions that "represent a grave violation of their human rights" according to the charity Save the Children, which has just published a report on the area together with the Family Institute at Madrid's Pontificia Comillas University.

Just some of the basic human rights violated include "the right to a decent home, water and sanitation as well as to social assistance, education or healthcare", according to the report.

One little girl interviewed by authors spoke of her fear of the mice and snakes that came into her shack: "The mice, right, sometimes they come into the houses at night and if there are little kids there, they eat them up."

The children also have no decent areas to play, with one little girl describing street conditions thus: "The little ones often get run over by cars on the street. Once a tiny little girl, who was two years old, was in the street and was knocked over by a car."

The slum was established around eight years ago and although families have been offered shelter in a migrant housing facility, most want to stay put.

"The alternative the government is offering is an isolated housing facility surrounded by major roads, where the families would be supervised. The children would have to change schools and accessing health care would be more difficult," Blanca Gómez, a lawyer who worked on the report told The Local.

Moving to such a facility would be the first step toward obtaining long-term accommodation in an apartment, Gómez explained. But she noted that not all families in El Gallinero are equally ready for such a shift.

"Some of the families have lived in apartments before, like the people who came to Spain during the country's building boom, but who have since lost their jobs," she said.

"Others, though, have basically lived as nomads after being kicked out of their homes in Eastern Europe and have no experience of apartment living."

If and when these people do find longer-term housing, they will then have to deal with a generally hostile society.

"People think the families living in El Gallinero are all criminals and that they want to live the way they do. They are rejected by Spanish society at large," Gómez said.

In the last 18 months, a third of the children living in El Gallinero have seen their homes demolished without alternative accommodation or any form of long-term stability. Save the Children are now calling on the government to call a temporary halt to such demolitions until a lasting solution is found.

"I want to have my house, to have my job and to have my money. I want to live a normal life like everyone else lives”, one boy told the authors of the Save the Children report.

The study does highlight one positive development in El Gallinero though. Most of the children are now going to school.

"These children are heroes. They keep smiling despite the fact they keep seeing their parents' rights trodden on," the lawyer Patricia Fernández told Spain's 20 minutos newspaper.