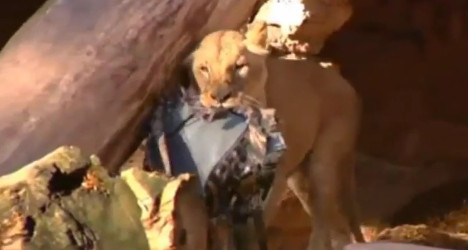 A lion emerges with the man's backpack after the attack on Sunday. Screen grab: Mundo Viral HD/YouTube

Justo José M. P., 45, who was dressed in military attire, was mauled by three lions after climbing the security fence, scaling down the wall and being dragged into a tunnel by the animals, as horrified onlookers threw stones and other objects to try to distract the lions, Spanish newspaper El País reported.

He was finally freed by zookeepers, who, together with firefighters and police, used fire hoses and extinguishers to keep the lions at bay.

He had multiple bites and scratches all over his body and was admitted in a critical condition to Vall d´Hebron hospital in the city.

Justo José M. P. is known in Barcelona for his one-man protests. On November 23rd he was arrested for hanging two swastikas from La Pedrera, one of the city’s famous Gaudi-designed buildings, in what he claimed was an anti-abortion protest. One of the signs read "Abortion murder" and another "40,000 children. Hitler (was an) amateur".

On September 11th he burnt an estelada — an unofficial flag flown by Catalan secessionists  — in front of a public monument and on November 4th he tried to enter the regional government headquarters with a sign about officials accepting bribes.

Sunday’s incident was no accident. The man reportedly was carrying a sign in his backpack that he planned to unfurl inside the lion enclosure.

A police man from the town of Gelida, Barcelona, Justo José M.P. is currently on leave, according to El País.

Although the victim jumped into the enclosure, Director of Municipal Services of Barcelona, Ignasi Armengol, opened a "rethink" on Monday on the zoo’s security measures.

He has argued that the incident was an exceptional case that has not occurred in the 100 year history of the zoo, but admitted that the zoo’s security measures "required analysis".