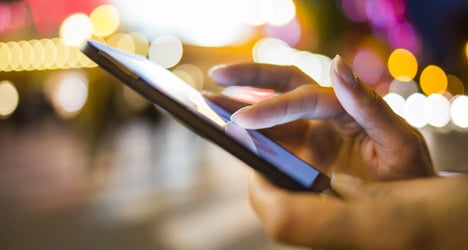 The figures come from a new study on the risk of mobile phone and computer addiction by the Organization of Consumers and Users (OCU).

It reveals that mobile phones have become the main means of accessing the internet, with 70 percent of those questioned using a smart phone to go online, according to Spanish daily, El Periodico.

Spaniards spend an average total of 33 hours a week on their mobile phones, more than the Belgians, Italians and Portuguese. While high level internet use does not, in itself, cause problems, issues can arise when users start to display risky or altered behaviour, said the OCU.

While general indicators for internet addiction are comparatively low for Spaniards, 33.4 points on a scale between 20 and 100, they rise sharply among young people, to 41 points out of 100 for those aged between 18 and 24, making people in this age group the most likely to exhibit signs of internet addiction, according to the study.

The study also showed a strong relationship between internet use and the degree of happiness users feel: those who are not dependent on the internet generally “feel more satisfied with life than those who are more dependent”.

The OCU also found the higher the usage of social networks among participants, “the lower the satisfaction with life”.

Perhaps unsurprisingly, checking emails and searching for information were the main activities carried out by internet users, closely followed by browsing social networks. 85 percent of those surveyed said they had a social media account.

1,900 people between the ages of 18 and 64 were questioned for the study, which also included questions on video gaming, internet gambling and pornography.