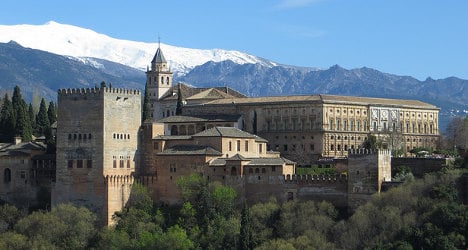 Users can now explore the Alhambra fortress in Granada and 49 more of Spain's most intereseting sites. Photo: Tim Rawle / Flickr

Armchair travellers can now explore 50 of Spain’s most iconic cultural sites thanks to Google’s 'Street View' technology, according to Spanish daily 20 Minutos.

Users can explore the Alhambra, the famed moorish hilltop fort in Granada, a fantastic example of Islamic arcitecture and garden design or see for themselves Gaudi’s majestic Sagrada Familia, one of the enduring symbols of Barcelona.

Other cultural wonders recently added include Galicia's Roman 'Tower of Hercules' lighthouse, the cathedral of León and Madrid’s Congress of Deputies.

Among the 50 iconic Spanish sites photographed “are many declared World Heritage Sites by UNESCO,” said Product Manager for Special Collections, Magdlena Filak. UNESCO sites include Las Médulas in León, the most important gold mine in the Roman Empire.

According to Filak, during the selection process “we considered the site’s importance to Spain but not only. We wanted to work in these areas because they are searched for not only by Spanish tourists, but on an international level.”

The Alhambra, one of the best examples of Moorish architecture in the world, can now be explored using Google Street View

The project was completed using three kinds of 360 degree image capture technology. ‘The trekker’, a backpack with a camera system on top, allowed camera operators to move through small spaces that were only accessible on foot. A trolley-mounted camera enabled the Google team to take detailed images of the inside of buildings, while for exterior shots they peddled around buildings on a ‘trike’, a camera-equipped tricycle.

According to a recent study on the Impact of Online Content on European Tourism, more than half of travellers to the EU consult internet sites and social networks to gather information on their trips. The new technology will enable those planning trips to Spain to check out the sites they plan to visit ahead of time.

As for future plans, Google says it wants to include “many more” of Spain’s rich cultural monuments on its Street View. “There are many sites still to capture,” it added.