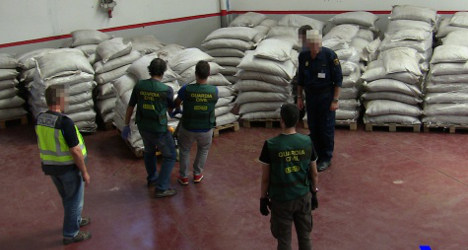 Spanish police discovered a secret cocaine lab, the first of its kind to be found in the country. Photo: Guardia Civil

The lab was the first to be found in Spain in which people were extracting an alkaloid from the coca leaf, the method used to make base cocaine.

The drugs were brought into Spain mixed together with palm kernel meal, a vegetable substance used for animal feed. The lab was needed so the group could carry out the chemical process required to extract the cocaine.

It is the kind of chemical lab most usually associated with Colombian drugs traffickers and more at home deep in the Amazon rainforest than a quiet Spanish town in Almería.

The secret laboratory was discovered after an operation that began last year when US and Colombian authorities tipped off Spanish police that a group people of Colombian origin, linked to drug trafficking activities, would be trying to bring a large shipment of cocaine into Spain.

The operation involved months of surveillance and encompassed Madrid, Almería, Toledo and Cádiz.

According to a statement released by the national police on Friday, it successfully broke up a drugs trafficking organisation with the arrest of 12 suspects: five Colombians, five Spaniards, one Nigerian and one Peruvian.

Spanish police said the Colombian in charge of processing the substance was known as ‘El Químico’ (‘The Chemist’).