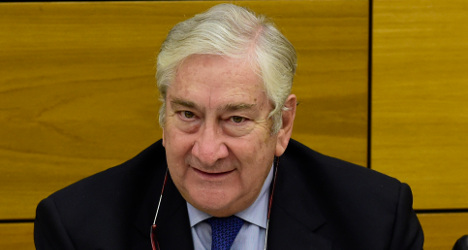 Javier Rodríguez was finally pushed out of office at midday by Ignacio González, President of the Community of Madrid, after his latest clanger.

"I’m just glad she didn't die, and it all had a happy end," said Rodríguez, 70, on Wednesday referring to Spanish nursing assistant Teresa Romero, who caught the virus in early October after volunteering to help with the treatment of a repatriated missionary.

He attracted cross-party criticism in October after making a string of public statements regarding the Spanish nursing assistant.

In the wake of speculation Romero might have become infected with Ebola after incorrectly removing her protective suit, he said: "You don’t need a Masters to learn how to put on and take off a suit", and "Some people are better at learning than others".

Back in October, Romero’s husband, who was then quarantined, responded to Rodríguez’s comments in a letter:

“I entreat you, speaking with the ignorance of a welder, to explain to me how to put on a protective suit, since unfortunately my wife did not get a master’s degree in such matters. Teresa had half an hour or so to learn it from a colleague, but she also has a willingness to serve others and a humility that you yourself lack.”

He also called on the Popular Party health boss to “show some personal honour and resign.”

Rodríguez will be replaced as Madrid’s regional health chief by surgeon Javier Maldonado.