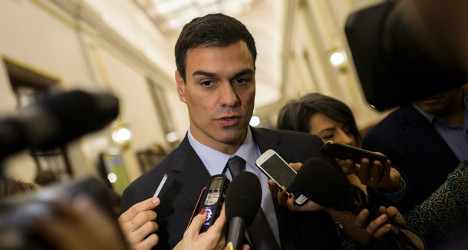 All day Wednesday and again on Thursday people have been lining up outside Spain's national parliament for a rare chance to visit the building during its annual "open days".

Among the participants at the event on Thursday was the leader of the Socialists, Pedro Sánchez who took the chance to go and meet the public. For Sánchez, the day also represented the perfect moment to submit a formal proposal calling for a working group on constitutional reform to be set up.

The proposal comes in the context of widespread corruption in Spain, threats to the country's welfare state because of austerity cuts and the political crisis brought on by the independence aspirations of Spain's Catalonia region.

"We only want the (ruling) Popular Party to open the debate, that's all," said Sánchez on Thursday.

"If the Popular Party uses its absolute majority we will have a problem because the government refuses to talk about looking for solutions to various crises," he was quoted as saying in El País.

The new proposal sees the struggling Socialists trying to raise their profile and position themselves as the reasonable middle ground in the bitterly divided Spanish political landscape.

The party was swept out of office in the country's last general elections in 2011, with many Spaniards blaming the party for the county's long economic crisis.

The party has also found it even more difficult to appear relevant since the arrival on the scene of Podemos, a new-left wing party which rose to prominence by winning five seats at the European Union elections in May and has since gone on to top national polls.

To coincide with their proposal, the Socialists have also released a short video about a woman, who at 36 — or the same age as the constitution — finds she suddenly needs a new home to accommodate the changes in her life, including a man, a child and a dog.

"Everyone here means something to me, it's all part of the woman I am, but I know it's time to keep changing. Not to hold on. Now there are four of us who live here. That's why we have to change and renovate our home," says the woman in the video, an allegory about Spain's constitution.