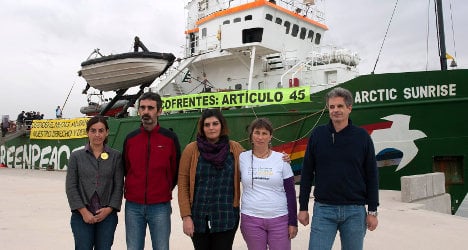 The activists broke into the Cofrentes plant, run by Spanish energy company Iberdrola in 2011 and painted "Nuclear danger" in big letters on a cooling tower. Photo: José Jordan/AFP

The activists and Pedro Armestre, an independent photojournalist who works for Agence France-Presse, are charged with public order offences and with injuring two security guards during the protest in 2011.

Activists broke into the Cofrentes plant, run by Spanish energy company Iberdrola, on February 15th, 2011, and painted "Nuclear danger" in big letters on a cooling tower.

Cofrentes is Spain's most powerful nuclear plant, producing five percent of the country's electricity overall. It has been running for 30 years.

Iberdrola and state prosecutors allege that the activists clashed with two security guards. They say one of the guards was injured by an electric saw used to break into the plant and that a second guard was hurt in the head.

The defendants say the first guard was hurt not with a saw but by a barbed-wire fence. Greenpeace says in its defence that Spain's constitution grants citizens the right to protect the environment.

Armestre, 42, has won several top awards for his photography including the Ortega y Gasset journalism prize this year. He said the protest had revealed security failings at the plant and that he was only there to cover the event as a photojournalist.

"This trial aims to blindfold the person who wants to show what is happening," he said.