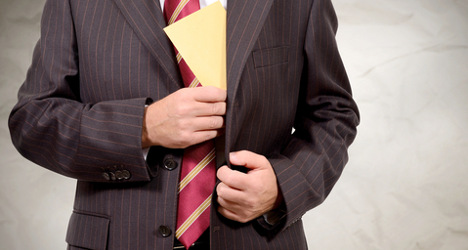 Photo of man with envelope: Shutterstock

Spain is currently ranked 37th out of 175 countries looked at by the global pro-transparency group Transparency International in its new Corruption Perceptions Index 2014.

The transparency score points Spain just behind Portugal, which received 63 points, but some way above Italy and Greece which both scored just 43 points out of a possible 100.

Denmark, New Zealand and Finland took the top three places in the ranking while the bottom positions went to Somalia, North Korea and Sudan.

"The improvement is of very little significance, Spain is in the same position, it's stagnant," Alejandro Salas, director for the Americas with TI told Spanish daily El Mundo.

"Corruption is nothing new in Spain, it's a historical phenomenon. When the economy was going well, it was ignored, people lived with it as if it was something that didn't bother then," he said.

"What I notice in particular about Spain is that corruption is very structural and very systematic. it doesn't belong to one party, a government or a a province. It is part of the fabric of different levels of society. The solution will require a lot of commitment and effort," the TI spokesperson said.

But Salas also noted it was perhaps surprising perceptions of corruption in Spain hadn't worsened in the last 12 months given a recent spate of corruption scandals involving everyone from sister of King Felipe to top executives at major banks.

The Spanish Prime Minister recently announced a swathe of new anti-corruption measures in the nation's parliament. However, this event was overshadowed by the resignation the day before of the country's health minister after a judge declared she had benefitted from her former husband's alleged involvement in a high-profile kickbacks scandal.

Another recent initiative forcing MPs and senators to provide information on travel costs was also described as of limited use.

Transparency says that because corruption is illegal and secretive, it cannot be empirically measured. So instead it collates surveys from the World Bank, African Development Bank, Economist Intelligence Unit and other bodies.

It then ranks 175 countries on a scale of 0-100, where zero means very corrupt and 100 signifies very clean. This year the average score was 43, and two thirds of countries were below 50.